An update on our facilities, online shopping & shipping.  LEARN MORE>

To access key features of this site, you must have JavaScript enabled.

Discover the heart of Thirty-One – a company founded with the simple mission to empower and support women! A mission to empower, 15 years and counting

I founded Thirty-One Gifts in 2003 with one simple goal in mind – to help women by giving them the opportunity to run their own successful business. That goal remains our No. 1 priority today.

Not only do our fashionable, functional products make life easier – they also help independent business owners across the country support their families and reach their dreams.

Over the past 15 years, our sales Consultants have held over 6 million parties. Along the way we've also been blessed to give back to organizations that share our mission in North America and around the world. You can learn more about our history below.

We all have a "why" – a reason for doing the things we do. Maybe yours is Family, Friends, Faith, Flexibility. Maybe it's just having fun. Our why is to help you reach yours. 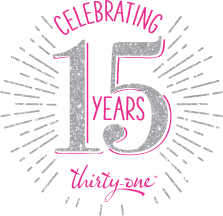 Since 2003, Thirty-One Gifts has been on a mission to celebrate, encourage and reward women for who they are, as we offer our fashionable, functional products to Customers – and offer our Consultants an opportunity to run their own business. Take a look back at some of the highlights from our first 15 years:

Thirty-One Gifts is founded
Thirty-One Gifts is founded by Cindy Monroe in her basement in Chattanooga, Tennessee, with help from a $10,000 loan from her family and two employees.
First party held
Guests could mingle and shop a gifting-focused line of candles, ceramic décor, cookie jars and custom handmade bags, jewelry and stationery. Since then, Consultants have held over 6 million parties throughout the U.S. and Canada.

Company relocates to Johnstown, Ohio
Thirty-One begins relocating from Chattanooga to Johnstown, Ohio. After quickly outgrowing that space, the Home Office moves to a larger office and distribution center in the Easton neighborhood of Columbus in 2010.

Studio Thirty-One launches
We launch Studio Thirty-One, which allows you to build your own bag and change up her look from day to night and season to season.
What's Next?
Here’s to another 15 years of fabulous products and amazing sisterhood!

Giving is part of who we are. That's why we created Thirty-One Gives, a charitable program that works to empower girls, women and families by helping them build the confidence and self-esteem needed to live a purposeful, thriving life.

Since 2012, Thirty-One Gives has donated $100 million in product and cash to charitable organizations that share the Gives mission. Learn more about our partners and how you can support Gives by clicking the link below. Thousands of women across the country have changed their lives for the better through Thirty-One. In each of our Catalogs, we feature a select few known as the “Circle of Honor.” Read their inspiring stories, and if you think this opportunity might be right for you, ask a Consultant for information about joining her team.

view the Circle of Honor